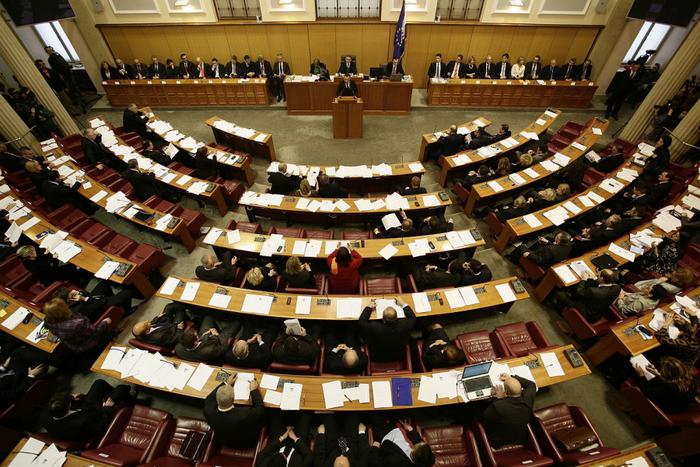 Last Thursday, an extremely brave Member of Croatian Parliament named Ivana Ninčević Lesandrić, stood up and told her very personal story of obstetric violence to the House and Minister of Health.

"I had a miscarriage. They tied my hands and feet and began the curettage procedure without any anesthesia. They scraped my uterus without anesthesia. Those were the most torturous 30 minutes in my life. I can describe every second to you because they were the worst 30 minutes of my life. Thirty minutes of degradation for every one of thousands of women who have signed petitions to end this type of "care".

As if it isn't enough that a woman has lost her baby, and is going through all the emotional stress that comes with it, no, she must also be physically cut apart in the (gyne) emergency department. My question is a simple one - do you ever plan on changing this state of affairs? When? I do not want any other woman to go through this."

The Speaker of the House reprimanded her for going over her allotted time and told her that she had put him in a very uncomfortable position because she had told such an intimate story in the Parliament.

At the same time, the Parliamentary Secretary told the Speaker that he should issue the MP a reprimand.

The Minister of Health, who was also present, said "Croatian hospitals don't do things like that. Give me your medical documentation so I can explain why anesthesia was contraindicated."

To this, Ms. Ninčević-Lesandrić replied "Please top lying and do something to change the situation. Thousands of women have signed petitions about similar experiences."

The public response to Ms. Ninčević-Lesandrić’s speech in Parliament was an immediate, intense outrage. These issues had been on the agenda before, and most people had assumed they had been settled. The idea of having an operation without any anaesthesia was received with shock and horror.

The next day, Friday, Roda - Parents in Action, a large Croatian parents’ organization, called for women to send their stories of procedures in reproductive health conducted without anaesthesia, written by hand and using the hashtag #PrekinimoŠutnju, or #BreakTheSilence. All stories received by 8am Monday were to be submitted to the Ministry of Health that same day - proving to the Minister of Health that he was wrong, and that the problem runs deep.

Submission to the Ministry of Health

By Monday morning, Roda had collected 400 handwritten stories, which were submitted to the Ministry of Health. An unexpected meeting with the Minister of Health ensued, with a number of promises being made to handle the situation.

What is the problem?

Women have been undergoing reproductive health procedures without anaesthesia for generations - from biopsies to medically assisted fertility procedures, surgical miscarriage and vacuum aspiration, to episiotomies and sewing tears after childbirth, not receiving anaesthesia has been the painful norm. The reasons for this are many-fold, but most lie in the inherent belief that women are made to take pain, and indeed, do not need anaesthetics. Although the problem is decades old, it has been compounded in recent years with an outflow of anaesthetists.

Public opinion is still on the side of advocates working to improve health services and ensure that women get the healthcare they need, with appropriate and adequately applied pain medication.

Updates to the situation and key documents will be published in English in this space.