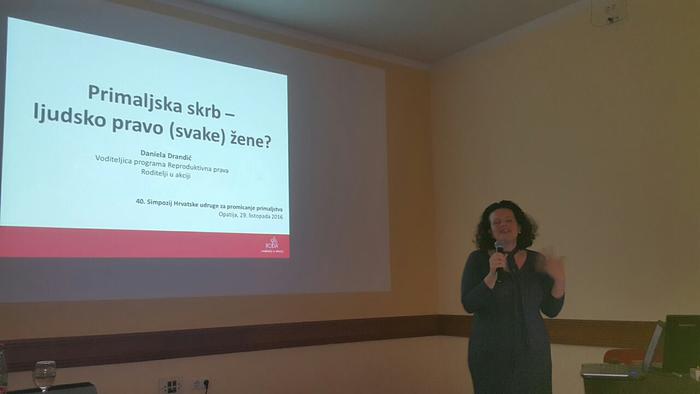 For English version, please scroll down.

On Saturday, 29th October 2016 the head of Roda's Reproductive Rights Program, Daniela Drandić, was an invited speaker at the 40th Annual Croatian Midwives' Symposium in Opatija. Roda has been attending the Midwives' Symposium for many years and it is an event that is important where members of Roda have the opportunity to network with midwives throughout Croatia, but also to discuss issues that are facing women from the perspective of consumer representatives. The Croatian Association for the Promotion of Midwifery has always been very open to having consumer representatives present and both associations have always worked well together to promote midwifery and women's rights.

At the end of the first block of presentations, questions were invited from the audience. A few interesting comments were given and at one point Dr. Trpimir Goluža, obstetrician-gynaecologist and president of the Croatian Medical Chamber. Doctors only rarely attend the Midwives' Symposium, and when they do it is usually only to conduct a presentation and leave. Never had the President of the Medical Chamber attended.

He asked the audience where the woman from Roda was (Roda's presentation was scheduled for later in the day, and nobody from Roda had asked any questions or made their presence known). Dr. Goluža continued to make a number of accusations that Roda has done irreparable damage to doctor-patient relations because women do not listen to their doctors any longer, that we do not understand how difficult it is to work in a Croatian maternity hospital. And that in her media statements Ms. Drandić had done nothing but criticise and say rude things about healthcare professionals Dr. Goluža continued channeling his anger towards Ms. Drandić as the person that was Roda's "face" in the media in these cases and at that event.

Ms. Drandić responded saying that she was sorry to hear that this is how our work was being construed, and that the #BreakTheSilence campaign from last year was negative, but had many positive outcomes because it put maternity care on the agenda. Among these was inspection teams sent to all Croatian maternities, the results of which have yet to become public. She furthermore noted that the Mother-Friendly Hospital Initiative, which had been standing still since beginning in 2012, finally began to move forward after #BreakTheSilence, and that thanks to that we are close to having four pilot sites testing the Initiative, and the full support of UNICEF and the Ministry of Health.

Dr. Goluža decided to respond again, belittling the Mother Friendly Hospital Initiative as just another initiative that won't have any impact, and stating that if consumer representatives truly wanted to help improve maternity services, they would help healthcare workers to procure better equipment for their hospitals. He reiterated a number of times that Ms. Drandić and Roda has done nothing but harm to maternity services.

Unfortunetly, the response from the audience of midwives to this outright and unsolicited bullying was a rounding round of applause.

As the second block of speakers began, the President of the Slovenian Chamber of Midwives and professor of midwifery about the process currently underway in Slovenia (a neighbouring country to Croatia which is known for always being a few steps ahead of us in all things "new") whereby the first independent midwives had opened their (private) practices and a working group was preparing a protocol for home births. It was interesting to see their process and some of the issues they were dealing with. It was also interesting to note that their premise was that out of hospital birth was happening, and that it was in their interest to find out how often it was happening, and to provide women with as safe as possible choice as they could (e.g. make it legal for independent midwives to practice).
During the following question and answer session, Dr. Goluža asked for the floor again. As he turned to comment on the talk about regulating out of hospital birth in Slovenia, and stated that the process was being done backwards, and that they should have fully completed the protocol on who is eligible for a home birth before they allowed midwives to begin working independently. The audience began to murmur, likely because the midwives were commenting to each other either that he was right or that women in Slovenia had already been birthing out of hospital but without regulated Slovenian midwives. At this point, quite upset at this constant berating, Ms. Drandić called out over their murmurs "As if women in Croatia aren't birthing at home," alluding to the current situation where Croatian women are birthing outside of hospitals with foreign midwives, all the while the Croatian medical system is ignoring their existence and as a result, encouraging an environment that is not safe or condusive for mothers and babies. Dr. Goluža replied saying "You see, if I had attacked a woman from Roda in this manner, I would be in the news, and look, she can be so rude, do you see this type of communication..."

Ms. Drandić then left the room, along with the President of the Croatian Association for the Promotion of Midwifery.

Dr. Goluža's accusations were inappropriate and stated in a time and place where these were not the topic at hand. Bullying and berating consumer representatives in front of an audience without any precontext has unfortunately been the modus operandi of many Croatian healthcare professionals, and this occasion was no exception.

When we learned about the rise of Hitler in Germany as students we always wondered how people could have let something like that happen. How hate could have infected such a large group of people, how could everyone have turned against minorities as if they were the source of all their troubles.

But in Croatia and the region we are currently being given insight as to how this happened over the past few years. Certain interest groups have been infiltrating and shaking up important organisations in order to obtain very high positions or leadership (this has included professional chambers, institutions of higher learning, various state bodies and agencies, even school parent-teacher committees and councils). Midwives it seems are now an important "nut to crack", and they are turning their attention here. What the goal of such work is, we can only guess, and will leave you dear reader to do the same. We can tell you that the fundamental issues are power and control, and the means are any and all available.

Before Ms. Drandić began her presentation later Saturday afternoon, she chose to read the following statement. Unfortunately, Dr. Goluža was no longer present to hear it, but hopefully, he has read it in its original or translated version.

"Until we overcome our own fear and begin acting in a socially-responsible and appropriate manner, we cannot expect to live in a society where the realisation of our rights is usual and normal."
These are not the words of an activist from Roda.

These are the words of Dr. Trpimir Goluža, president of the Croatian Medical Chamber, words he said in a public appearance a few months ago, where he called for women to report violence or other inappropriate behaviour they experienced during childbirth. To feel free to make the reports personally, without feeling that they should remain anonymous.

Today, this room is full of people who know each other, who have shared struggles and achievements, who know what it is like to overcome many of your own personal fears and what it is like to act in a socially responsible manner with the goal of protecting the interests of women and children.

There will come a time when we will live in a well-functioning society. Perhaps we will not live to see this, but perhaps our daughters will have the opportunity to live in a "normal" world where it will be as inappropriate to hear misogynistic comments from behind a gynaecologist's coat as it is to hear a cat-call or whistle from a construction site. Perhaps even more inappropriate, because the comments made from behind the gynaecologist's coat come from a position of power and influence, and go far beyond mere words.

That's what women who said it happened to them reported. But who knows if they're telling the truth.

When we applaud, we should think about what we're applauding. When we instinctively smile instead of reacting, we should consider that we are doing harm to ourselves and to our daughters and to our granddaughters.

Today, I will not battle my own fears but will instead battle my own resistance to hold my presentation at all. Such an atmosphere has not existed at this Symposium until this year. For Roda, this Symposium has always been a "safe space" where we come year after year, because all of you here, midwives, are the collaborators and sisters, not of Roda, but of all women.

But, as in other areas, public and private, related to rights and obligations, over the past few years it has become evident that for Croatian women, nothing is sure or safe anymore. Perhaps then, more than last year or the year before, I have the duty to overcome my own resistance and speak to you about Women's Rights in Childbirth. 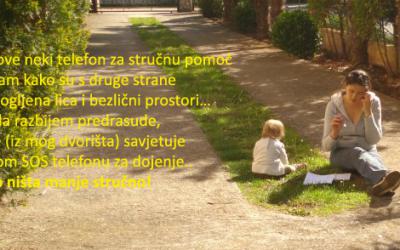 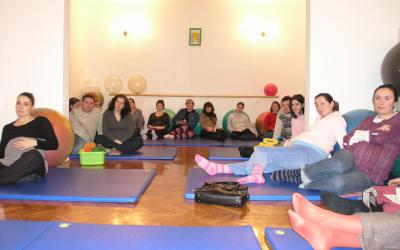 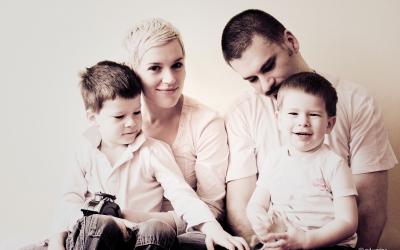 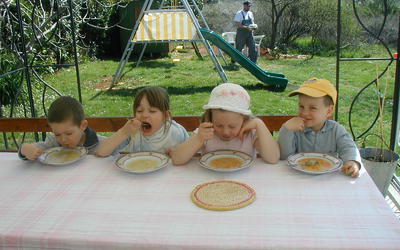 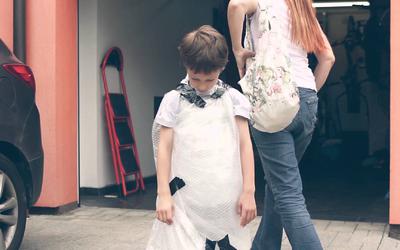